PGE retirees have worked through major disasters, whether floods, fires, quakes, wind and of course ICE.  These events affected generation, transmission, distribution, or customer operations.  Here are some stories and pictures submitted by our members (send more stories please).

On July 16, 2016, retiree Carol Maresh and 19 other PGE volunteers challenged PacifiCorp (Pacific Power) to a pack-off at the Oregon Food Bank’s North Portland warehouse to benefit our hungry neighbors in the community. 20 volunteers from each company combined into the mighty “Power Packers” team for an evening of fun. We met in the lobby, wished each other luck, and proceeded to sort and bag the delicious tubers from huge bins for well over two hours. It was entertaining to compare the different sizes and shapes of the various types and share our favorite ways to prepare (and eat) them.

It was intended to be a friendly competition and was, for the most part. Each team brought a corporate banner to pose with beforehand, and we took a group photo of the entire Power Packers group afterwards. PGE won the competition easily, having packed approximately 11,000 pounds of potatoes; PacifiCorp performed nobly, bagging about 8,800 pounds. There were several other volunteers, so the grand total was stunning – 37,651 pounds packed, or the equivalent of 31,376 meals (320 meals per volunteer).

In the end, the winners were the families who received the spuds and the cheerful Power Packers who helped relieve hunger.

Other PGE retirees who participated were Jim Rodman and Duncan Howatt. 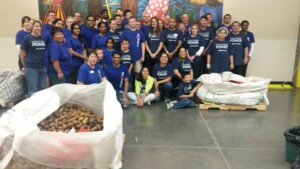 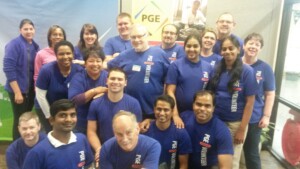 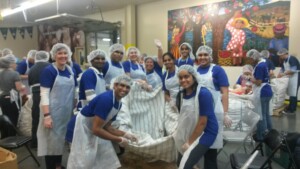 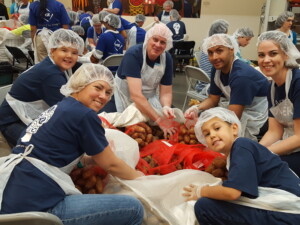 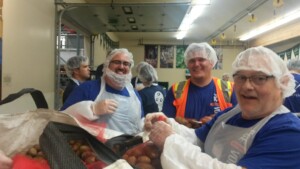 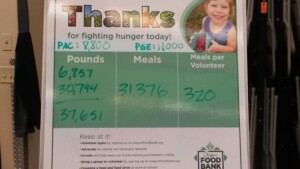